1. advocating social, political, legal, and economic rights for women equal to those of men.

Now, before you go judging me based on the Title of this Blog alone (which is totally why I choose the title, because I knew some people would read it and get angry) let me at least try to explain my point of view. I was raised by a Strong Independent Black Woman.  My views on the world were hugely impacted by my mother’s struggles as well as her accomplishments.

I was taught that I was going to have to work twice as hard to get half as much, and that is just how the world is.  So when the concept of Feminism entered my life, I was very much set in my ways.  I fought attaching the title of Feminist to my person, because everything I had ever learned made Feminism quite unappealing.  There are several different Feminist viewpoints I’ve used to try to figure out where I stand.  I’ll use 3 of them to support my ‘argument’ as it were. So please, follow me on my journey into Feminism.

According to Black Twitter . . . anyone who uses that statement in any way – who isn’t completely trying to DISPROVE or DEBUNK what ever follows it – shouldn’t be trusted.  Point. Blank. Period. Black Twitter is usually a HORRIBLE representation of Black Group Think.  Sadly, the majority of the people who have been made most famous by Black Twitter are complete idiots.  But then, that’s my opinion.  For all you know I could just be saying that because I’m not part of the Black Twitter Elite.

Anyway, back to my point.  The first time I read anything that had to do with the Black Feminist Movement, it was on Twitter.  So I started following certain people, because their viewpoints were intriguing and different from anything I had ever seen.  However, after week Three of the $200 date debate, I realized that the loudest people were the ones that seemed to not even understand what Feminism was.

Male Black Twitter: All women should be glad we are even paying attention. They are flawed from the jump. From their thighs that touch in every picture to their nappy ass natural hair. Be grateful for this attention. I don’t have to give it to you. Also, if you are talking during any major sporting event, it better be to ask me what I want for dinner, or tell me it’s already done.  Your place is serving me.  My allowing you to serve me is giving you power.  Embrace that shit, and smile.

Black Feminist Twitter: Men are useless. We are strong enough to impregnate ourselves if we just put our minds to it. Men hate women, and because they make negative remarks they are clearly gay and wish they were women. Also, every time a woman is attacked, all men resort to calling her a whore/ugly/fat.  This is because these men secretly want to date these same women.  However, do to their massive inferiority complex, they would never approach these women.  In private, all men cry at night for the wrongs they have done women.  Lastly, Black Men date White Women because they are afraid of the strength the Black Woman holds.

Honestly, I really had never really thought about Feminism and it’s effect on my everyday life.  I was too worried about being Black and Fat.  Being a woman came in a distant third as something that was holding me back in society.  So what people thought my place was, in the long run was irrelevant.  I was much more concerned about my next paycheck.  But then, I got a job that shoved me RIGHT SMACK DAB into the Feminist Movement. 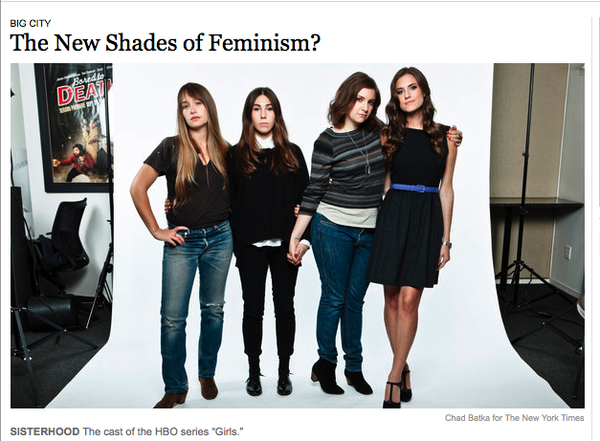 Nothing says Feminist like a White Woman.  Whenever I think Feminism, I ALWAYS see two images.

It always seemed to me, when you don’t have to worry about the major in things in life (food, clothing, shelter) you have much more free time to focus on societal issues.  Having to hear a white woman tell me she is sorry for how my life has gone is just . . . Take your White/Liberal Guilt and ease on down the road.  Heffa, you don’t know my struggle.  And watching The Help has not made you an expert on the Black Experience.  Your Great Grandfather making his fortune on the Backs of Slaves just means that’s what he did.  You aren’t obligated to fight for me.  Don’t become flustered or uncomfortable when I decide to fight for myself. Precious Lord Take My Hand, and help these women STOP thinking that apologizing makes my struggle go away.  It doesn’t.

When your skin is black, all other labels are pushed to the back burner.  Plus, what school textbook was going to teach me about Audre Lorde, Angela Davis, Nina Simone, and Bell Hooks? I know about them because I watch Netflix and random Documentaries. Feminism has always presented itself to me as a White Person’s Movement. One amazing example of this was the #SolidarityIsForWhiteWomen treading topic on Twitter created by Mikki Kendall. So many ‘famous Feminists’ were so upset that Black Women were blatantly saying they weren’t (and had never really been) a prominent part of the Feminist Movement.

Google the word Feminist.  The first 40 pictures are of white women or white men.  I didn’t even know there were African American women from the beginning of the Feminist Movement.  Because these women didn’t identify as Feminists.  They identified as women who were trying to make a better life for themselves and those who were going to follow them.  They were fighting for Civil Rights, or Voting Rights, or Gay Rights. But first and foremost they were seen as Black Women.

3) The Feminists I’ve met in the last 9 months

9 Months ago, I began working for a domestic violence organization.  It was a job I took because I wanted to work with the children in the shelter.  I have several people very close to me who were affected by DV as children, and they most of them have said the trauma is still with them today.  Imagine my surprise when my job wasn’t just about working with the children, but their mothers as well.  The organization I work for stresses Empowerment over Enabling.  I spent the first 6 months trying to figure out what that meant.

We live in a society that devalues women every day.  In the media, in songs, in movies, on television.  Women have to fight for an inch while most men are 1000’s of miles ahead of them.  At 31, I had accepted that fact, but didn’t understand the root of the issue.  It’s not angry white men, or angry black men . . . It’s privilege. As long as ANYONE has a perceived advantage over someone, there will never be a real change in society.  In August of this year, I attended the Forging Justice Conference held in Detroit, and met same of the most amazing people! They all embraced the title of Feminist, and they were completely different in every way.

One of the speakers was Melissa McEwan of Shakesville.com. Listening to her speak showed me, even though it seems every person who attached the moniker Feminist to their name is worried about self, there are some people out there who get it.  Who understand that Feminism isn’t JUST Equal Pay for Equal Work, or getting more women jobs in large corporations.  It’s educating the masses about every problem/concern/barrier every woman has.

Another Feminist who continued to challenge my idea of what Feminism looks like was Marc Grimmett.  He presented his documentary, My Masculinity Helps.  In a very realistic way, his movie explores the many avenues by which we can help young black males become an integral part of the Movement.

I also met Ashon Crawley, a contributor for the Crunk Feminist Collective. Besides being one of the most eloquent people I’ve ever met, his message was something I had never encountered. Talking about how the Church and ‘Sacred Texts’ played a huge part in the creation of such a misogynistic society was like . . . Mind = Blown.

Feminism became something different for me.  It’s wasn’t marching and protesting, it was honest discussion about why there need to be changes, and how to go about it in a way that will actually make a difference.  Not just #WhiteGirlProblems or #MuslimGirlProblems, but society’s view of women as a whole.  From Rape Culture to The Pornification of Today’s Youth to why Blurred Lines is the world’s most Rapey Song of 2013. Feminism can be about education, and health, and relationships, and everyday life.  So where does this leave me?

Awareness comes with a cost. Once you are aware of an injustice, ignoring it is like committing that act, or perpetuating that problem yourself.  So I can’t blast Blurred Lines, without thinking of my clients who heard those same words while their significant other violated them.  It means: I can’t support an artist who objectifies themselves, and markets that objectification to young girls. It means: I feel some kind of way when Chris Brown says he “lost his virginity” at the age of 8.  It means: I have to question my support for certain people based on their actions. It means: I don’t have the stomach for certain behaviors anymore.  Labeling myself a Feminist is a difficult transition and responsibility.  Embracing the Feminist that lies dormant inside of me means letting go of some of my ideals.

So yes, when I grow up, I want to be a Feminist. But until then, the Journey continues.