“…And music shall define our souls, the beats ever changing, the melody acclimating itself to our mind state.  And the rhythm shall guide us to where we should be.” – Me

I wrote this in a letter to my little sister one day.  It was how I felt about the Gnarls Barkley album, St. Elsewhere.  It was ch a life changing albm for me, both in the subject matter and the time that it came out.  Here’s that Blog lol. 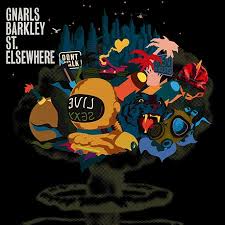 When this album came out, my life changed.  I don’t mean that in the metaphorical sense.  I mean my entire life changed.  I had just recently moved out of my mother’s house, and into my first apartment that wasn’t paid for my Sallie Mae.  I was living in a beautiful apartment, and I was losing a best friend.  The Summer of 2006 taught me what kind of person I should be, and who in my life was important.

The first time I heard this song I thought, “Well, that’s a new sound for Cee-Lo.” Then all of a sudden it was EVERYWHERE! Every commercial about a new product, every reality tv show, every radio station (white or black.) It was like the second of Christ for some people when they heard this song.  But the reason this album still means so much to me is the memories this song represents.  The moments where everyone told me I was being irresponsible with my time, and it didn’t seem to phase me. A time in my life where my biggest worry was working 4-9hour shifts at work so I could take half of friday off and drive to Dayton and/or Columbus.

I used to be (and kinda still am) the epitome of Living Paycheck To Paycheck.  I traveled every two weeks, on a Friday that’s I got paid.  I would spend about $300 in one weekend, then come back and take care of bills.  But it was worth it!  Keep in mind, this was before Facebook, (yes I’m that old) and all we had was MySpace. I wrote blogs everyday, and we sent emails during the work day to plan out our weekends of debauchery. For a while, it’s was just traveling the state of Ohio to attended various Pride events.  The real fun began during the 4th of July Weekend.

Please Notice the AMOUNT of

liquor on the Entertainment Center

The Summer of 2006 is the last time I drank on a daily basis.  The amount of money we all spent on liquor and food was just . . . Thank God my Uncle was having his annual invite everyone you know BBQ.  So we ate for free that weekend . . . more $ for Liquor! When we weren’t having random photo shoots, we were walking around malls harassing strangers.  And the whole time, St. Elsewhere was playing in the background.

This is not to say there weren’t some dark times that Summer. There was that one time when this chick tried to kill herself and we had to call the cops to go find her. And in that same weekend, we all decided to get “Frivolous White Girl Tattoos.” That summer a marriage ended, and my roommate moved out leaving me alone with a $849 a month rent (because she was in love with her boyfriend). *it should be noted my former roommate is now happily married to this man*

Blogging about how much fun we were having . . .

The ups and downs of Summer 2006 are why I love thinking about that summer, because everyday brought something different. I think I wrote like 12 blogs a month.  I was in a place where everything meant something.  Every experience meant something life changing.  I was so damn EMO that Summer.  This was the first time I had to worry about money, and having enough of it.  I didn’t have my mom to borrow money from every other day.

How can you hear that song and NOT want to make new friends in public.  While dressed provocatively. And slightly drunk.  I mean really. The majority of the Summer of 2006 . . . was FUN.  I mean like crying laughing type of fun.  For every tear shed in sadness, there were 1000’s shed while rolling around laughing on the floor.   It’s the summer I met The Girl, and she made me the greatest fried Chicken I’ve ever had. She is the reason (while 100% sober) I wrote this little song:

Chicken, Chicken, It’s Delicious
Love to eat it everyday!
Chicken, Cook it, Fry It, Love It,
Chicken, eat it Everyday!

You don’t know you are happy until you look back at it.  But MAN, I was so happy that summer.  I did what I wanted to do, without fear of what people would think of me.  In my mind, my actions didn’t effect anyone but me.  There was no such thing as a repercussion.  That’s the summer I learned that Love has not age limit or sexual orientation.  It’s just love. The usual end of Summer is celebrated Labor Day Weekend. And Celebrate it we did! The Blog Title for that weekend: Liquor, A Smelly Cat, 2 Bathroom Orgys, a Spanish Serenade, and  A Gay Chicken. *please click that, it’s worth the read*

I don’t even remember TAKING this picture

The most enduring part of Summer 2006. . . The memories I didn’t get a chance to write about, because I was having too much fun.  It’s the songs we sang at the top of our lungs while driving up & down the highway. It’s the outfits we coordinated the day after labor day, because they were all white, and we don’t give a damn about your rules.  It’s the fact that every picture we took that summer had us in the same order. It’s every mile we put on my leased car.  It’s every bottle of liquor we finished, that ended in laughter and merriment. . . And strangely, the Blog I wrote as a tribute to the people who made it so great still stands!

Shout-out to The Girl: For  making me get off my ass and go to arts and crafts.  For being such an incredible person, a loving person, and the Ambassador of Let’s Make it All okay.  People like her make it a better place in this world, so shout outs to you, for making an emotional breakdown not last as long as it could have . . .

Shout-outs to Aaliyah: Who refuses to back down, who lives her life the way she wants to, regardless. To love, in it’s many shapes and forms, in old pictures, and drunken almost fights, and passing out in Paris, and other random shit, to happiness.  To a love that will never die, even if we are separated for like 3 years cuz of stupid girls, you will forever be my little sister, and it will always be my right, do tell you what i think is best for you, lol. . .

Shou-tout to the Word FUCK: To being able to use it and express pure emotion, to making it work in any situation, to being able to yell it in a car, and make someone listen to the words you are trying to say to them . . .

Shout-out to Diamond: To giving the Best Damn Hugs EVER, even though they weren’t appreciated the way they should have been.  To knowing that things change, and people change, but fuck anyone else that doesn’t have your best interests at heart.  To hoping that she finds her happy place, inside her self, and to hoping that she knows that regardless of everything else that happened, will happen, or is happening right now, she will always be my wife . . .

When was the last time you danced?